I’m in the vortex today! 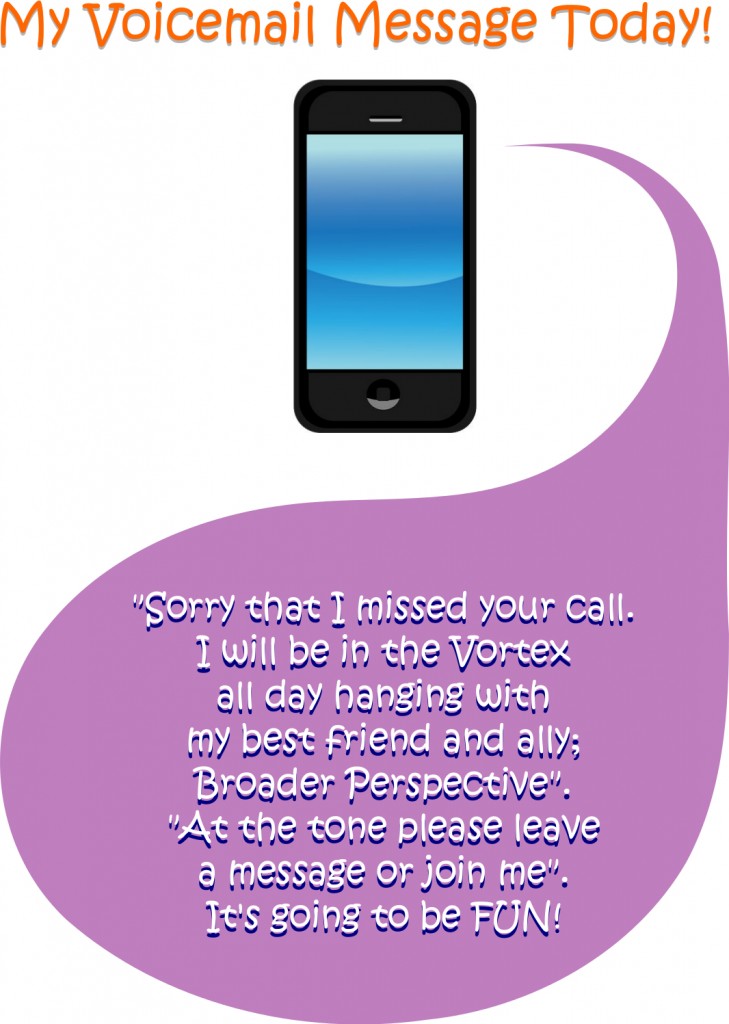 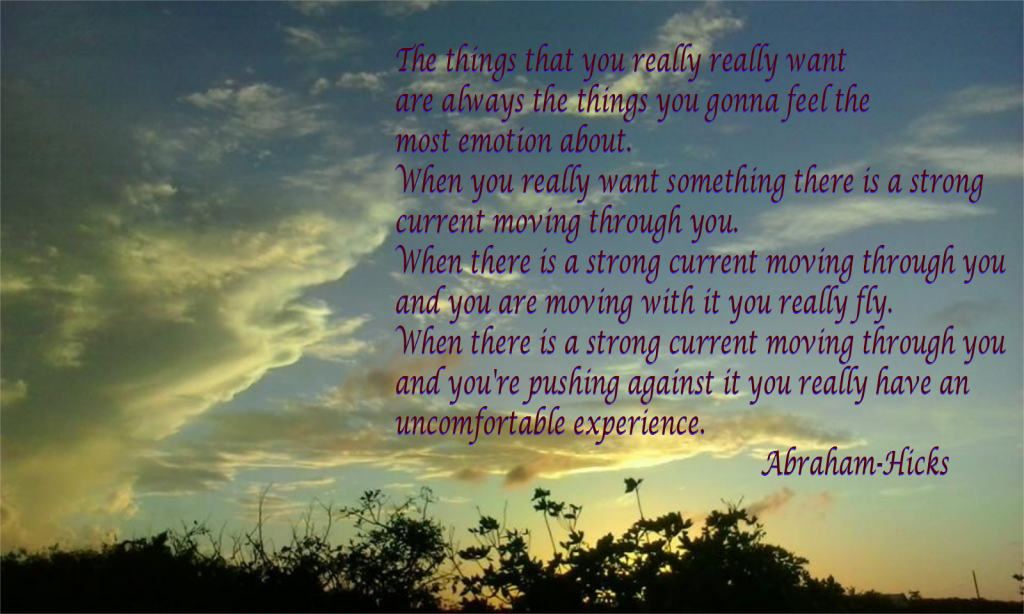 Death is not the End

Death is not the End – was first published in Science of the Mind magazine in June of 1994.

My Father, who always took responsibility for those in his care, worked very hard all his life to provide his family with the best he could afford-many times neglecting his own wishes and desires. During his productive years, he looked forward to the time of retirement as his own, a time when he could devote his energies to those things he loved so much.

However, this time for himself was not to be. He became ill shortly after retirement with a progressive degenerative disease. Doctors called it some form of Parkinson’s disease and gave him no hope to live. They told him that his body would become harder to manage and to control, and that he would finally lose his ability to move.

My father’s body did begin to deteriorate. At first, he would lose his balance and fall. Then he could only move with the aid of a walker. Then he was bound to a wheelchair, with all control of his lower body and legs gone. Eventually he became bedridden and everything had to be done for him, including his having to be hand-fed. He finally lost his ability to speak.

Because I live far away form my parents, I did not see the deterioration on a day-to-day basis. However, about six months before he passed away, I began to experience a lack of energy, severe muscle pains, and stiffness in my joints so intense that sometimes I could not pick up objects that would normally be easy to handle. I was working in my own restaurant at the time, and my fatigue became so severe that I had to sop working. I assumed that I suffered from the long hours, demands and stress of the restaurant atmosphere. I thought some time off would restore my energy. I closed the restaurant and rested for four months but without much success or improvement in my condition.

I am a firm believer in the healing powers of plants, herbs, and communion with nature; So I immersed myself in gardening, gathering natural herbs, taking long walks on the beach, and hours of meditations. However none of these previously successful methods improved my condition. In fact, some days it took all the will I could muster just to get out bed. I never lost faith, though. I would get to the bottom of what was causing my chronic fatigue and pains.

One day my mother called and insisted that I come to see my father. She needed a break from the responsibility of the constant care and attention he required. I had avoided this encounter for a long time. I wanted to remember my father the way I had last seen him…healthy. But she insisted that I come, though I complained I was not feeling well myself and didn’t know how much help I could be to her. However, something deep inside urged me to go, and I followed the urge, albeit reluctantly.

I never realized how close my father and I were until I walked into his bedroom and saw his body curled up, stiff, in a fetal position. I saw then that, in some way, the pains in my own body were reflection of his twisted-up condition. I understood that, unable to talk and call out physically, he was communicating with me in terms of his illness, and I was somehow picking up that communication, feeling his pain as though it were my own. I had felt it strongly, almost to the point of becoming immobile, but did not realize the origin of it. I asked my mother if my father was receiving physical therapy and she responded that he was not, because the doctors felt it would not improve his condition. In fact, they explained, forced movements might cause more pain.

One morning as I sat next to his bed, silently holding his hand, it occurred to me that if my father could communicate his pain to me, I could use my body to send him therapy. I began to dedicate all my activities and movements to him. Visualizing as I exercised that, somehow, what I was doing would help. I started to do it while I was visiting him and continued when I returned home. Every morning I would dedicate the day to him . Not surprisingly , the exercise helped my own condition and I became able to move more freely.

Then one night while I was driving home, as I reached the top of the last hill before my home, I experienced a sharp chill that pierced my body like a giant ice pick. Next, I felt a warm, glowing feeling of well-being and total painlessness-all the aches and pains in my joints and muscles disappeared in an instant. I knew at that very moment that my father had released all the pains of his physical body, taking with him all of mine. I knew he had passed away.

The next morning I received a call from my mother saying, “Daddy is gone. He died last night.” Then she added, “I don’t understand it. Since you were here, he actually seemed to be getting better. Then he just took a turn for the worse and now he’s gone.” I understood. Intuitively, many previously vague concepts crystallized for me.

As the family gathered in preparation for the funeral, I felt my father’s presence around us constantly. During that time I tried repeatedly to put in words the experience of his last communication with me, so I could relate to the rest of the family, the sensation I had and the feeling it left me with. But each time, the words that came out just did not seem to describe the incident at its fullest. Then, the morning of the funeral, as I was dressing, an urge to stop what I was doing and write overcame me. I picked up my journal and put down the words that flowed through me, not pausing until the flow ceased.

As I read what I had written, I saw in my mind’s eye the moment of my father’s separation from his physical body and transition to the world of the spirit. There I saw that he was being greeted by others who had gone before him. There were his mother and father, his oldest son (who died at the age of three months), his granddaughter (who passed away at the age six), and my mother’s father (who was the most recent one to depart). All gathered to welcome him into a place of peace and love.

The words I had written filled me with the most profound feeling of peace and love and described my experience of his passing in a much broader and universal way than I previously could. Then I experienced the total release of my fear of death. The words seemed to have come through, yet from beyond, all the loved ones I saw receiving my father’s soul as he transitioned to the world of spirit.

Although I have always been spiritually receptive, sometimes it has been a last resort rather than a primary motive. Since that day, however, I’ve had a conscious commitment to make spiritual growth and awareness a priority in my daily experience. I share these words in hopes that they bring comfort and understanding to those who seek it.

DEATH IS NOT THE END

Why Do Roosters Crow? 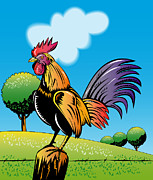 Why do roosters crow?

Most people think the answer to the question “why do roosters crow?” is that they crow to announce the dawn. But farmers and people who live in the vicinity of a farm know that roosters also crow during the day, so announcing the dawn may not be the only reason.

Some think roosters crow to announce impending danger to their hens, or in response to some far away sound; like the sound of a tractor or the moo of a cow and more..

Recently I have discovered that may be just speculation or conjecture. A scary recent personal experience leads me to believe that in fact there is a more profound answer to the question “why do roosters crow?”

I suffer from recurring severe migraine headaches. These episodes, occur about once a month and I have learned to live with them. I am not sure what triggers them. I suspect they are related to weather changes.

In winter a cold front approaching can trigger the onset of  migraine and when the front has passed the migraine just goes away.

I know how to manage and reduce the intensity of the pain using different techniques. Sometimes deep breathing and relaxation works. Other time I talk to the migraine and ask it to please leave. Although it does not leave, the pain seems to subside somewhat.

The most recent migraine episode was really intense. I felt that little sensation over my left eye that announces the onset just before bedtime. I knew it was going to be a long night, so I started with my deep breathing, relaxation and meditation. After a while I was able to drift to sleep.

I woke up sometime during the night, in agony. The pain was so intense it was unbearable, and unmanageable. Nothing I did seemed to tone it down; just the opposite every move I made seemed to intensify it.

It hurt so much I felt I could not endure for the duration. I wanted it to go away. Stop. I wanted to be out of my body. I was now in a very unstable state on mind; on the edge. It’s a scary place. I panicked.

I realized I should not be alone right then and there and I reached for my cell phone to call my neighbor although it was still dark outside.

Before I could dial, his rooster crowed. The sound felt so real and so close as though he was right there in the room with me it had a sobering and grounding effect. It brought me back from the edge.

My state of panicked disappears. I looked at my cell phone time and it was 3:00 AM.

So for me, the answer to the question “why do roosters crow?” is a profound one.

Roosters crow to lead lost and frightened souls back to a place of safety. My neighbors rooster saved my life that night. His song was like a beacon that led me back from a very scary place; the edge of the abyss.

The Little Prince & the Fox 2

Gotcha! Glad you’re curiousity got the better of you and you came back. 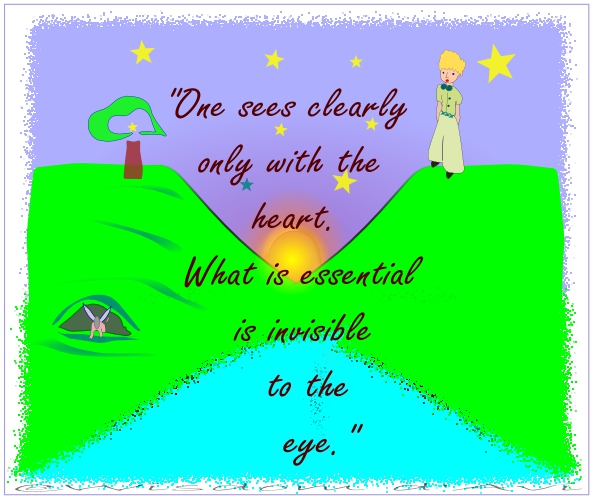